Home > BEHIND THE MASKS > History Of The Venetian Mask 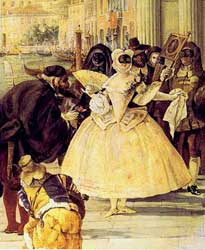 History of the Masqueraded Men

In 1436, the masters of the Guild of Decorators in Venice re-organized the mask making industry by proposing a certain number of rules that were ratified by the Giustizieri Vecchi - the magistrates responsible for vigilance of the arts and crafts at the time.  This was when the Venetian profession of "maschereri" or "mascareri" (mask makers) was officially recognized with its own statutes.  Growing demand was attracting additional artisans to this profession and regulations were required!  A document, now in Correr Civic Museum in Venice, indicates that between 1530 and 1600 eleven craftsmen were registered in this guild as "mascherer" - even including a woman named Barbara Scharpetta.  They were joined in their art work by "targheri" - craftsmen who created new "faces".

The wearing of masks in theatres dates back as far as the ancient Greek festivals in honor of Dionysius, god of theater.   When the Romans conquered Southern Europe, they adapted the Grecian love of theater and the use of masks in plays and celebrations. The Venice Carnival, (or Carnevale) which dates back to the 15th century, is still famous today, attracting visitors from all around the world to the color and excitement of this ancient tradition.

The Role of Masks in Everyday Life 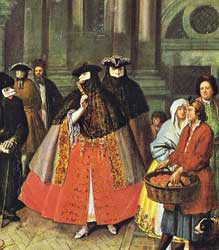 The Venice Carnival (Carnevale) began on the 26th December and ended on Shrove Tuesday.  It therefore lasted more than two months.  It was the most sumptuous and extravagant carnival in the world, but the incredible thing is that it made up only a part of the period in which mask wearing was permitted.

The first law regulating the use of masks dates back to the 13 century, but nobody knows when the Venetians actually started wearing them as a part of every day life.  What we do know, however, is that this all ended with the fall of the Venetian Republic, at the end of the 18th century.  Before that, the law allowed for masks to be worn for most of the year.  In the 18th century for example , from the 5th October to the 10th June - 8 months - apart from 10 days during Advent and the 40 days of Lent.  This does seem excessive at first, but can be explained.

Venice was an aristocratic republic with it's unique style of democracy effective only within the upper classes, while the ordinary people had no say in government. Despite this, the aristocracy was always loved and admired by the people.  Therefore, with the wealth, power and consensus they enjoyed, the aristocracy could impose its own lifestyle as a model for the whole of Venetian society. 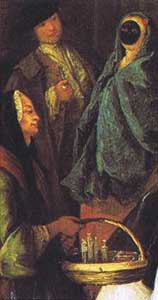 However, the Venetian nobles were not fat, idle feudal land lords and they certainly did not live off the backs of the rest of the people.  They were merchants and adventurers, who risked their riches and sometimes their own lives on the ships which worked the Eastern trade routes.  They had to contend with pirates, storms, attacks by enemy warships and the people and customs from strange lands.  Adventure for them was a way of life.  They therefore created a city which offered all types of adventure, in every sense of the word!

The masks represented absence of rules and freedom of action.  You could do anything you liked with the anonymity of a mask and adventure was possible in Venice itself, among the offices of institutions, regardless of the laws and the vetoes of morality, however severe they may be!  So, over time, the Carnival broke the traditional boundaries and masks entered the realm of every day life.  In some places, they actually were compulsory by law!  For example, in the state casino, you could only play if you were wearing a mask!

After the fall of the Venetian Republic, mask making did go into a period of recession, but has enjoyed a renaissance since the 1970's and today when visiting Venice, there are masks on every street corner and they are purchased by visitors from all around the world.

italymask.com masks are all made in Venice using the ancient methods of mask making that have been passed down from generation to generation for centuries.  We have personally visited all our suppliers and seen their artisans at work in their workshops, ensuring that the masks are indeed Venetian.

History of the Venetian Carnival

The Venice Carnival is the m

ost well- known and one of the oldest festivals annually celebrated in the world. The word ‘carnival’ or ‘carnivale’ in Italian is believed to be derived from the Latin words ‘carnem levare’ or ‘carnelevarium’ which mean to take away or remove meat! Another meaning for the world carnival could be also from the Latin words ‘carne vale’ or ‘farewell to meat’.  That phrase perfectly describes a time devoted to preparing for Lent, the Christian tradition of the forty days period before Easter, during which abstinence from meat is practiced. The Venice Carnival takes place each year in February. It begins around two weeks before Ash Wednesday and ends on Shrove Tuesday, also known as Fat Tuesday (Mardi Gras in French or Martedi Grasso in Italian). Anti-Mask Law The main feature of the Venice Carnival has always been the stunning masquerade costumes and masks. Masks used to have symbolic and functional features. During the Venice Carnivals in the past the streets of Venice were full of the people wearing masks which allowed them to protect their identity and remove any social differences. Besides, masks allowed a wearer hide his identity during licentious and dissolute activities. The earliest documented mention of people wearing masks dates back to 1268 when masked people were banned from playing various games by law.  When the Great Council prohibited to throw scented eggs filled with rose water towards strolling ladies, Mattaccino masks became the first law regulated masks. They were worn by young nobles dressed as clowns. This ‘game’ turned out to be so popular that the government even made a decision to install nets to protect those ladies from soiling of their expensive garments. In 1339 another law prohibited masked people from visiting nun's convents, painting their faces and wearing false beards and wigs (in order to protect people from robbers and murders who regularly wore them). The lack of any other documented sources about masking suggests that people did not wear them frequently before the 13th century.

The First Carnival However, it is believed that the tradition to celebrate the Venice Carnival may have

started in 1162 with the celebration of the victory over Ulrich II of Treven, the Patriarch of Aquileia (an ancient Roman city in Italy). Urich II was taken prisoner together with his 12 vassals and eventually released on one specific condition. Every year on Holy Thursday the Patriarch was obliged to pay a tribute to Venice that included a bull and 12 pigs which than were slaughtered in the Piazza San Marco in front of Venetians to commemorate the victory. On that day the street celebrations, games, people dancing and bonfires would take over the streets of the city. By the 18th century the Venice Carnival became one of the most popular tourist attractions and attracted people from all over the Europe. The festivities continued for 6 months of the year. During that time, Venice was known as a centre of gambling, the ‘Las Vegas’ of its day. It was the place where music and dancing continued almost non-stop. This period is also associated with the Venetian painter Francesco Guardiand with the famous Venetian adventurer and ‘womanizer’ Giacomo Casanova. Unfortunately, the Venice Carnival fell into decline after when Napoleon signed the Treaty of Campo Formio and Venice became part of the Austrian-held Kingdom of Lombardy-Venetia in 1797. On January 18, 1798 the Austrians took control of the whole city and the Carnival almost disappeared for nearly two centuries. In the 1930s Venice Carnival was banned by the fascist government and was finally revived only in the 1980s with its distinctive traditions and celebrations making Venice as one the best Carnival destinations for tourists from all over the world.