Zanni is probably not the first character that springs to mind when you think of Commedia dell'Arte characters.  That is because the Zanni character is seminal to many other characters in the Commedia dell'Arte theater, including Arlechino, Brighella, and Pulcinella.  The name 'Zanni' is a diminutive of Venetian name 'Giovanni' (John) and we get our English word 'zany' from this, which gives you an idea of the nature of this character!  The Zanni character was a buffoon or clown and known in those days as a simpleton or 'stupid incompetent fool'! 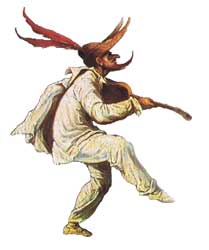 This character was drawn from the lower classes of the time, the peasant or migrant worker who worked in Venetian society as a servant, valet or porter.  Sometimes also as an odd job person or hawker.

The term Zanni therefore refers to a class of mask although in some cases was a specific character as well.  This clown was an important aspect of Commedia dell'Arte theatre, representing the peasant class of society.  Zanni reflected the role of the Bergamo peasants, who at that time were facing a famine in the rural areas they lived in due to cheaper imports from Greece (sound familiar?) after their region was conquered by the Venetian army in the early 1400's.  They flooded in to the urban cities such as Venice, offering themselves for whatever work they could find and eeking out a living in anyway they could.  In their favour, they were famous for their nimbleness and agility on the positive side and on the other side - their crudeness.  Overlaid on all of this was their fantastic dialect and manner of speaking - these traits formed the basis of an important character in Commedia dell'Arte.

In the early days of Commedia dell'Arte, the Zanni mask used in the theatre was a full face mask with a long nose.  It developed from here into a half mask covering the upper half of the face only with an extended, long nose.  The longer the nose on the mask, then the more stupid was the character.

The costume of the Zanni character reinforced for the audience the nature of this character.  Usually dressed in sacking and hunched over through carrying heavy loads as a porter, with knees in a 'bowed' position and feet splayed apart.  This was in sharp contrast to the aristocracy characters in the Commedia dell'Arte who always carried themselves with erect deportment.  Zanni was always highly animated, waving arms and gesticulating with hands when speaking in a coarse manner with erratic body movements thrown in!  Some Zanni characters were known for their acrobatic feats, including hand-stands and flips.  Others displayed their roots and were constantly ravenously hungry (coming from a famine in their home towns) but their coarseness also introduced mirth into the theatre with farting, burping and resounding snoring. 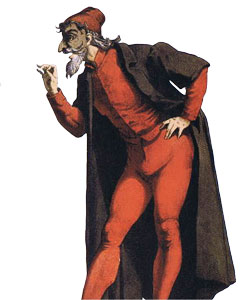 Pantalone is a well known Commedia dell'Arte character.  The original name of this character was an old man named "Magnifico".  He spoke in plain, yet musical Venetian dialect.  The original name soon gave way to the more well known "Pantalone".  There are numerous interpretations about the origin of this name.  It is said that it derives from San Pantalone, one of the Saints venerated in the city of Venice.  A Venetian church is even named after San Pantalone.

Another possible origin is the term "piantaleoni", a name used for the merchants who opened their stalls in conquered lands and symbolically "planted" the Lion of St Mark to extend the power of the city of Venice through trade.  The character Pantelone is of course an old merchant, so it does give some credence to this theory.

Other theories are that the name pre-dates this era and goes back to the Greek expression meaning "powerful in all things".

Pantalone's character is generally an old merchant, often wealthy and esteemed, at other times completely ruined, yet always an old man in every detail, with business skills.  His mask typically highlighted his physical characteristics including a hooked nose and prominent eyebrows.

Browse through the Italy Mask "Traditional" selection to see if we currently have a Pantalone mask in stock.


Il Dottore in Commedia dell'Arte is usually dressed in the traditional style of a medieval doctor, with a huge black suit, often with a ruff and a notary's beret or large doctor's cap.  He wears a mask over half of his face that highlights his bulbous nose.

Il Dottore is a comic personage originally from "well-fed and learned" Bologna.  He is a 'doctor' only in name and is depicted at times as a learned physician and at other times as a notary or lawyer.

Browse through the Italy Mask "Traditional" selection to see if we currently have an "Il Dottore" mask in stock.

The Arlecchino mask is one of the most popular masks in the Commedia dell'Arte series.  It was traditionally worn by the character Arlecchino (Harlequin in English) who was cast as a bit of a dim-wit, silly, simple minded person and perpetually hungry, again, in the Zanni genre.

Arlecchino is one of the youngest characters of the comedy and the use of this character in the Commedia dell'Arte has been traced back to as early as 1593.

Arlecchino's usual role is that of a faithful valet or servant, but in this context he is also the clown, the acrobat providing lots of comic relief!  As soon as this character appears on stage there is always lots of laughter at his absurd actions and words, alternating between flashes of brilliance and plain idiocy.  You can't predict which will manifest itself at any time! This is overlaid with wit and charm, as well as scheming to meet his own objectives.

While undertaking errands for his master or pursuing a pretty lady (or both!) he gets into all manner of strife.  He employs every technique he can to achieve his objectives, including pretending to be a soldier or a woman.  His absent mindedness is legendary and he can be looking for the chair he is sitting on or completely sidetracked by a pretty lady, money or food!  All the while, his boundless energy is causing his supple body to undertake somersaults, handstands, cartwheels and all sorts of acrobatic feats! Understandably, he was loved by audiences.

Arlecchino's costume usually comprised a jacket and trousers with colorful and irregular patches, with a white felt hat with a rabbit or fox tail and a belt with a wooden spatula (or 'slap stick').  This was used to stir polenta or sometimes to slap another person, a parcel, baggage, food or other items belonging to someone else!

Arlecchino's mask has a puggish nose, sometimes a bump on his forehead and usually with devilish and feline features.  He is truly a colorful character!

Browse through the Italy Mask "Traditional" selection to see if we currently have an "Arlecchino" mask in stock.

The Pulcinella mask in the Commedia dell'Arte theater is reputed to have originated from the south of Italy (Campagnia), a region boasting a wealth of comic traditions.

Pulcinella's physical appearance in the theater often resembled that of a cockerel.  His mask with a beaked nose is thought to have given rise to his name, either from the Latin 'pullus gallinaceus' or from a dialect corruption of 'pullicino' (young chick).

Regardless, his big nose, squeaky voice, clownish ways gave rise to him being cast as a charlatan, lazy bones, tumbler and acrobat.  The Pulcinella character appeared in many acts of the Commedia dell'Arte and it was this character that prompted Giandonmenico Teipolo to paint him on the walls and ceilings of the Villa Zianigo in Venice.

We usually have a number of Pulcinella masks in stock. Review our selection of Traditional Venetian Masks now.


Colombina is usually cast as a mischievous maid in the Commedia dell'Arte, a comic but not always virtuous figure with a best friend (and sometimes lover) of Arlecchino.

Her costume is usually simple, representing what maids wore in the 1700s.  She sometimes wore colorful patches (like Arlecchino) set off by a small white cuff and an apron of the same color.

Colombina is translated into English as "little Dove" and the masks in this range are without exception purely "Eye Masks", just covering the eyes and exposing the mouth so that the wearer is able to eat and drink freely.  This design is said to have originated because of the character Colombina's vanity and not wanting to obscure too much of her beauty with a mask.

These masks form the basis of a large number of variants all based on the Colombina Eye Mask, but are now available in feather, leather, jolly, baroque, metal filigree and macrame / lace.

Because of their utility to be worn at masked events, such as masquerade balls, these masks are the most popular Masquerade Mask.

Browse through our collection of 150 Colombina Masks now - there will be one there that is just right for you.


Il Capitano's character in Commedia dell'Arte is usually a vainglorious, deceitful and braggart soldier, dressed in a bright and colorful uniform.  This was usually a suit with multi-colored stripes and gilt buttons, a feathered cap and a large sword with several rust marks or even some cobwebs!  His part usually involves him boasting of great exploits of war, but he is also the subject of pranks and jokes from the other characters.  He sometimes responds to this by unsheathing his sword, but the only blood that is ever spilt is his own!


Brighella is cast as a shrewd servant in the Commedia dell'Arte in the 'Zanni' genre.  One of his specialties for this role are the tricks and pranks that he plays on other characters and is sometimes also an expert musician, singing and playing the guitar.  This meddlesome, greedy and astute servant is also a ruffian, ready to satisfy even the meanest desires of his master.  He is usually totally unscrupulous and ready for any craft.

His costume is that of a servant, but usually with several short green stripes on a white background on both shirt and trousers.  He sometimes also wears a cloak and a cap with green stripes.

For some reason, Brighella's popularity was partly eclipsed in the Commedia dell'Arte by Arlecchino, who became much more popular with audiences.